"All the elements of a classic western, with an assortment of imps, ogres and demons thrown in for good measure." 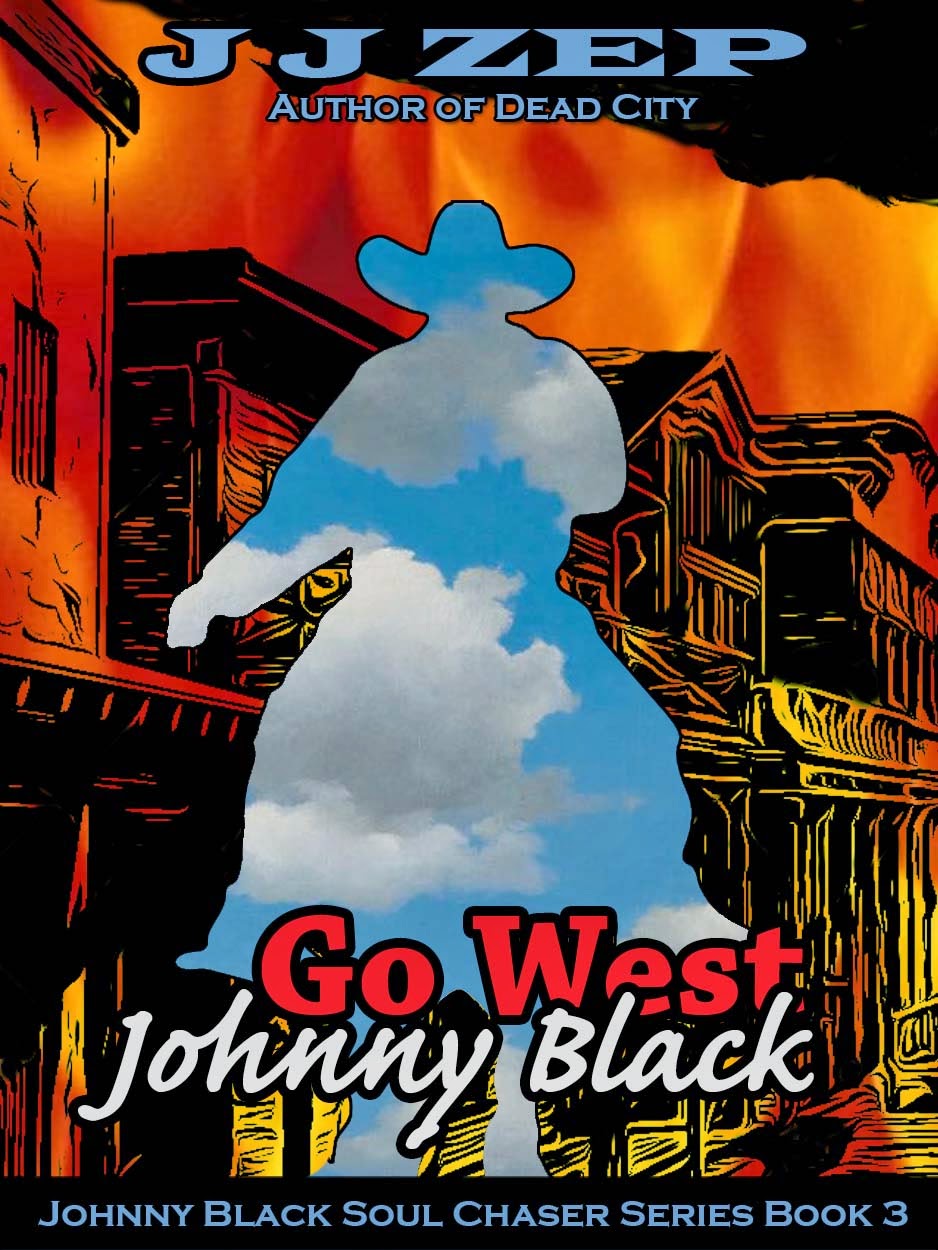 Johnny Black is on the run, with half the soul chasers in Hades hot on his trail. Escaping through a portal he ends up in Devil's Gulch, a frontier town in the New Mexico territory, and is thrown straight into the midst of a ranch war.

But that is the least of his problems, he's ended up in the body of a notorious gunfighter, the Hellfire Kid, and every gunslinger from Texas to California wants a crack at him.

And then the soul chasers start to show up in Devil's Gulch - Pandora Jain and Ringo, Onslow Foster and Walter Retlaw, not to mention SPAA agents Barnes and Noble.

Now Johnny Black has to save the woman he loves, fight a duel with John Wesley Hardin - the fastest gun in the west - and avoid being sent back to hell, where he faces 10 000 years working the furnace in the Global Warming Department.

Bodies of water are portals, doorways that we Soul Pursuit and Apprehension agents use to travel from hell to various times and places in history. If you’ve followed along on my soul chasing missions thus far, you’ll know that I’ve ridden these portals to 1920’s Chicago, to ancient Rome and to revolutionary Paris.
The portal I was entering now would - I hoped - take me to the old west. I say hoped because my impish assistant, Jitterbug, hadn’t seemed that sure himself. And if he was wrong then I’d end up, not in the Wild West, but instead in Moscow during the Black Plague, a prospect I was not even prepared to contemplate.
Now, you’d be forgiven for wondering what the SPAA was doing, sending me on a mission with such imprecise intelligence. The truth is, I wasn’t on a mission this time around. No, this time, I was a fugitive myself.  On the run from Mr. Abaddon - the second most powerful demon in hell - and the punishment I was likely to face for leaving Hades Correctional without the proper paperwork on my last mission.
Serious though that charge was, I didn’t have time to worry about it now. What I needed to do was to get moving, before they sent someone after me. And, of course, they would send someone after me. Hades Correctional did not take kindly to souls going AWOL, especially those of former agents.  I just hoped I was far away by the time the alarm went up.
I cast one last, wistful glance upwards, towards the surface of the pool. For a brief moment, I considered giving myself up and surrendering to the tender mercies of the Hades Conciliatory Commission. But that moment soon passed, there would be no turning back. I pulled myself into the side-shaft.
Unlike some of the other waterways I’ve used, this one was clear and calm. I paddled along gently for the first fifty yards, feeling almost as though I was in a trance. The passage made a gentle curve and seemed to bend back on itself. As I approached the curve I felt myself beginning to accelerate, and as I rounded the corner I was suddenly hauled forward into blackness. I felt myself falling without resistance and then came the gut-wrenching reversal and I was propelled upward and thrust into the raging, churning waters of a fast flowing river.
I hit the surface and had a quick look at my surroundings, fearful that I might have ended up in the Moskva. But the steep red walls of a canyon and clear blue skies above belied this. Wherever I was, I was most certainly not in medieval Russia. Jitterbug had been right after all.
It was pointless fighting the current, so I let myself go, and enjoyed the rush of the whitewater ride. I was thrown into jagged rocks, pushed under the water and dragged along the riverbed. But, of course, none of this posed any danger to me in my present state. Souls, you will remember, are liquid in water, and but for a small firefly-like speck of light, entirely invisible.
Up ahead I could now hear the thunder of a waterfall and I allowed myself to be pushed over. One minute I was in the river, the next I was in freefall, twisting in the air and crashing into a deep pool of cool, crisp, water below. I paddled across the pool and slid between the rocks that formed a natural dam at the other end.
The river proceeded at a much more sedate pace after that, and eventually the canyon opened up onto a dusty plain. Based on the distinctive red rock, the sparse brush, and the flat-topped mesas in the distance, I figured I was in either Arizona or New Mexico. I wasn’t sure exactly what year this was, but as the time frame was the old west, it was likely to be some date between the mid-eighteen hundreds and the turn of the century.
The river had now started to narrow. Before long it wasn’t much more that a stream, and as it continued on its way across the prairie, it was reduced to a mere trickle. Pretty soon, I was sure it would dry up altogether.
Which left me with a problem. I needed to find a host, and I had a feeling that was going to prove difficult out here in the middle of nowhere, and nigh on impossible, if the river dried up completely.
Up ahead the creek now made a bend and as it did I saw a man straddling two rocks that the water coursed between. As I passed, he crouched and dipped his canteen and I flowed through the opening and down its neck.

I was scooped up into the dark interior of the canteen and the man sealed its lid plunging me into complete darkness. Then, it seemed, the man started running, and I found myself being bounced and tossed and thrown around even more violently than I had been in the river. The sloshing of the water against the sides sounding like some giant, industrial washing machine but, after a time, the jostling stopped and I could hear a grating sound and light suddenly streamed in.
“What kept you so long?” I heard somebody growl.
“Crick’s almost dry,” another voice said. “I was as quick as I could be.”
“Give it me,” the other man said.
“He still alive?”
“Well if he ain’t, it’ll be your fault.”
“Wasn’t me that shot him.”
“No, but you’re the one holding onto the water, so pony up and give it here.”
A moment later, I felt the canteen being tilted and I could see a cowboy lying in the dirt. He was dark-haired and pale, and there was blood on his mouth and the front of his shirt. His eyes looked glazed, and he appeared not to be breathing.
“Zeke,” one of the men said. “Drink some of this.”
“It don’t look like he’s breathing, Turk.”
“Yeah? Well, you ain’t no doctor. So quit jawin’ and keep an eye on the brush, in case any of Chisholm’s boys are still out there.”
“But…”
“Just do it.”
I felt the canteen being tilted again. “Come on, Zeke,” I heard Turk say, “Get some of this down your neck. You ain’t gonna make it unless you drink some.”
Turk pushed the canteen to Zeke’s lips and I felt myself sliding towards the neck of the water bottle and I instinctively started swimming against the current. Don’t ask me why I felt the need to resist. I needed a host, of course, but I wasn’t sure if this man was dead yet, and I had no idea what would happen if I entered a living body. In the end though, I had little choice in the matter. The walls of the canteen were slick, and though I tried I couldn’t prevent myself being propelled forward. I was flushed through the opening, into the man’s mouth and down his throat.
Immediately, I knew something was wrong. On the other occasions that I’d entered a host I’d instantly had control of the body. Now, I found myself in pitch darkness, and with the strong sensation that I was being watched.
“Who the hell are you?” a voice suddenly boomed.
“I’m…I’m…”
“You some kind of a retard? I asked you a question, mister!”
“I’m Dexter Blackwell…err, Johnny Black, Soul Pursuit and Apprehension Agency.”
The voice was silent for a moment. “How’d you find me?”
“I didn’t, I…”
“Don’t lie to me boy, or I’ll shoot you down like the yeller dog you are.”
“I’m not lying,” I said, and then realized the implication of the man’s threat. “You do realize of course, that in order to shoot me, you’d have to shoot yourself.”
I expected the booming voice again but if the owner of that voice was still around, he wasn’t answering.
“Mister?” I said. “Sir? Are you still there?” But there was no reply.
“Turk,” I now heard one of the other men say. “Riders coming.”
“Chisholm men?”
“Looks like.”
“We better skedaddle then.”
“What about Zeke?”
“He’s done for. Let’s ride.”
I heard them mount up and ride away, and after a while I heard another set of hooves come to a halt close to where I lay. I opened my eye a crack and could see five riders kicking up a mini dust storm. I decided it might be best to play dead until I understood what their intentions were.
“Holy crap!” a voice said. “That’s the Hellfire Kid.”
“So it is,” another voice said. “Check to see if he’s still breathing. If he is, we’re gonna have ourselves a lynchin’.”
I heard someone running in my direction and after a while felt a hand placed on my chest, then on my neck. Finally, I felt my mouth being forced open and the man leaned close enough for me to smell sweat and bacon fat.
“He’s done for, Bill,” the man said. “Took a slug straight through the heart. Looks like ol’ Zeke Blake’s hell-raising days is over.”
“Told you I got one of them,” a different voice said.
“Okay,” the voice I took to be Bill said. “Sling him up on that pony. There’s a fifty-dollar reward on the Hellfire Kid down in Lincoln. Look’s like we earned ourselves a little bonus, boys.”
I felt hands on the front of my shirt and felt myself being pulled into a sitting position as another rider approached and came to a halt.
“What we got here, fellers?” the new arrival said.
“Zeke Blake, the Hellfire Kid, Mister Chisholm, shot dead like the mangy dog he is. We was figuring on riding him down to Lincoln and claiming that bounty.”
“You’ll do no such thing,” Chisholm said. “We’re cattle men, not bounty hunters. Bury him.”
“Seems an awful waste, putting fifty dollars in the ground and all.“
“You want fifty dollars, Bill? How about I give you fifty dollars severance money?”
“No offense meant, Mr. Chisholm sir. Just thinking out loud.”
“You confine your thinkin’ to cattle matters, like I pay you for. You boys give Mr. Blake a decent Christian burial. Albert you say a few words on it, then you all round up the strays and head on back to the bunkhouse. I’ll have Rufus cook us up some bear sign tonight.”