"An action packed adventure that steps of the gas and hurtles down a twisting road at breakneck speed." 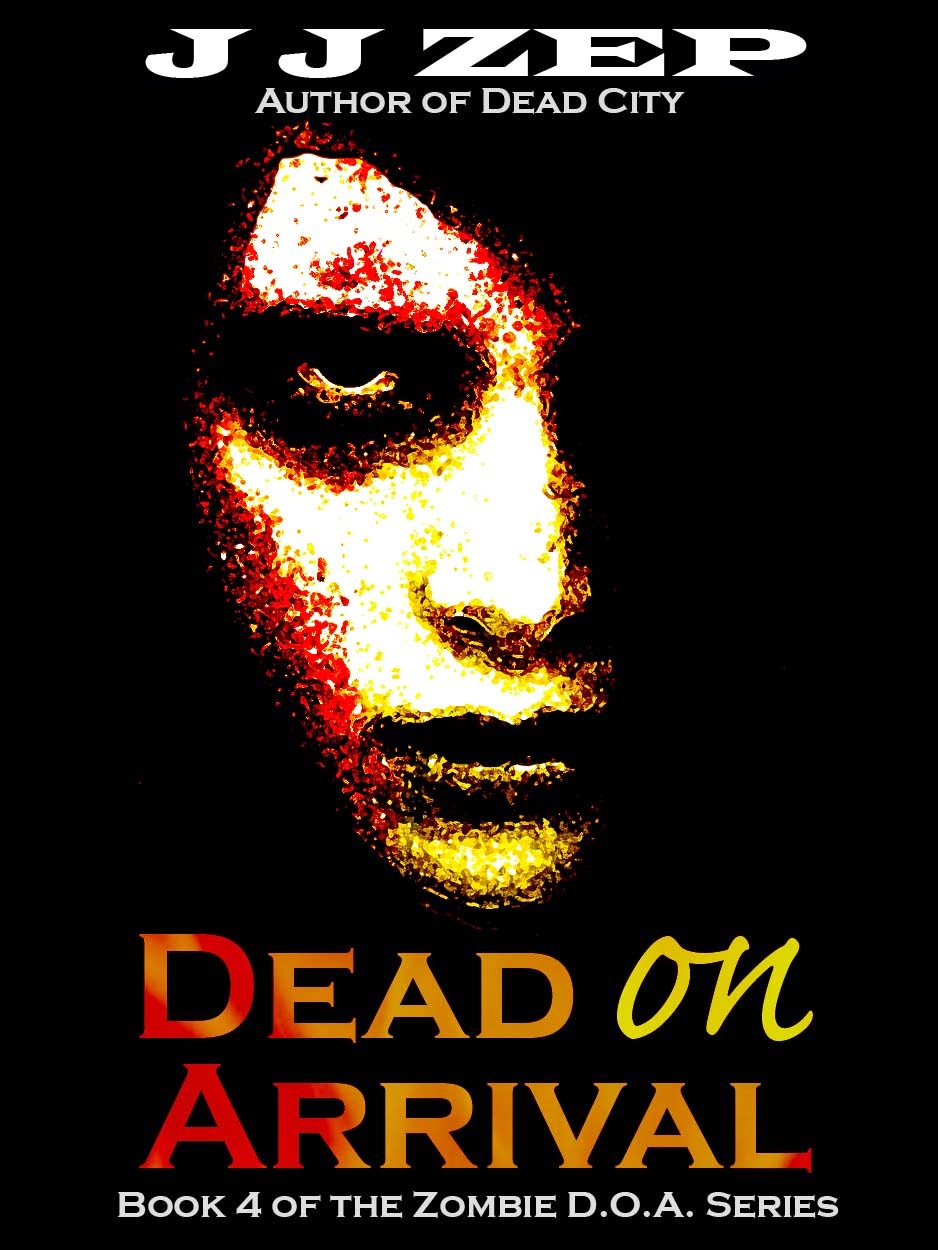 Even before Chris Collins has reached California he's been given a warning - stay away or die! But after three years on the road searching for his daughter he's not about to give up.

Now Chris is in a race against time to save Ruby. To do so, he must fight his way through zombie-infested Los Angeles, taking on not only the Zs, but gang bangers, Corporation soldiers and an old friend who seems determined to hinder his progress.

He'll meet a three-year-old with incredible powers, win the WBC middleweight belt and finally come up against the madman who started the whole epidemic and who plans to conquer the world at the head of a zombie army.

The question is, will Chris find Ruby in time? And if he does, can he save her from what she's become?

I watched the Audi accelerate into the distance and I screamed until my throat was hoarse.  Other than Ruby, everything that still mattered to me was in that car and I felt a sense of powerlessness that bordered on insanity. I actually started sprinting along the blacktop, as though I’d somehow find the strength to catch the fleeing car. But there it was now, racing away from me, taking Kelly towards a fate I couldn’t even bear to contemplate.
Then suddenly, I saw the car veer left, correct right and leave the road. It plowed into the brush and crossed maybe thirty yards, bucking like a bronco, then came to a halt in a fog of red dust. And then I was running, sprinting faster than I’d even run before, oblivious to the burning in my lungs and the blood running into my eyes from the wound on my forehead.
I ran until I was maybe twenty yards from the Audi, now a dust-covered wreck sitting askew on its chassis, its windscreen cracked and blood-spattered. I forced myself to slow and take in a few deep breaths to steady myself. Despite my concern for Kelly, I knew they were armed and I wasn’t.
I skirted around the side of the vehicle towards the driver’s door. Thelma was behind the wheel with the airbag deployed pushing her back in her seat. She wasn’t breathing though and I could see why, the side of her head was a bloody mess, where a bullet had torn into it. The back seat was empty, so I skirted quickly around to the other side where I found Kelly. She was sitting with her back against the side of the car, looking dazed but seemingly unhurt.
“Jesus, Kelly,” I said, rushing to her.
I hugged her and she started crying, “I’m okay, I’m okay,” she assured me, “But you, you’ve been shot.”
“Just a scratch,” I said. “But how? What happened?”
“Giuseppe,” Kelly said and started to cry again.
“Giuseppe?” With all that had happened, I’d forgotten about Giuseppe, asleep in his den at the back of the vehicle. “Where –?”
Kelly pointed towards the brush and following her finger, I now saw Giuseppe lying just a few yards away. I ran towards him and found the dog lying on his side, taking in quick, shallow breaths. I could see blood on his muzzle and as he breathed a pinkish bubble formed on his mouth. Giuseppe looked at me and whined and tried to lick my hand. “What have you done to yourself this time, big guy?” I said and suddenly all of the emotion of the day overwhelmed me and I was sobbing like a kid with a spilled ice cream cone.
I felt Kelly’s hand on my shoulder. “Water,” she said and I took the bottle from her and washed the blood from Giuseppe’s mouth. Then I asked Kelly to pour some water into my cupped hands and the dog made a few half-hearted laps at it. It was then that I noticed the drag marks through the brush.
“Stay with G,” I said to Kelly. I ran back to the car and found the .38 in the passenger footwell. I followed the tracks and found the man lying on his belly in the brush, thirty yards away. He was breathing heavily and it was a miracle he’d made it this far. I flipped him over and I could see that Giuseppe had ripped a sizable chunk out of his cheek, and left deep bite marks across his face. His milky eye had been punctured and now oozed colorless pus. The man had obviously suffered injuries in the crash too, and he now coughed up a mouthful of frothy blood. He looked at me with his one good eye and tried to say something and I fired a round from the .38 into his brain, then kept pulling the trigger even though the hammer fell on an empty chamber.
Later, Kelly would tell me what had happened. After they’d driven away from the diner, the man had demanded the .38 from Thelma. He’d held the gun on Kelly and unzipped his fly. “He said he wanted me to…do something to him,” Kelly said.
But then Giuseppe had risen from his den and the man had found himself face-to-face with an angry 120-pound Akita. Giuseppe had bitten the man in the face and the man had fired off a shot, hitting Thelma in the side of the head. The car had veered off the road and the man had been thrown into the front seats. Ironically, his body had broken Kelly’s forward plunge, saving her from serious internal injuries.
“Giuseppe saved my life,” Kelly sobbed, “If it wasn’t for him…oh, my God, I don’t even want to think about it.” I held her while she cried and as I did I ran my hand through Giuseppe’s fur, this dog who had so often been my savior.

Kelly had some bruising to her ribs but she was otherwise okay, in spite of the trauma she’d been through. She was a tough kid, Kelly. Despite her slight frame she was a stayer. The more serious problem was Giuseppe. He’d been thrown forward when the car had left the road, crashing into the front seat. I’m no expert but it looked like he’d broken a few ribs and maybe one of his front legs. I wished that Yonder could have been there to take care of him.
The Audi, of course, was a write-off and we had no choice but to head back to the diner. We were hundreds of miles from the nearest town and, what had Thelma said, they’d seen only two cars in a week along this stretch of road. All we could hope was that there’d be someone along some time soon and if there was, that they’d stop for us.
On my first trip back to the diner, I carried Giuseppe, trying my best to be as gentle as possible, which was not easy lugging a 120-pound weight across uneven ground. The big guy had to be hurting, but he only whimpered once or twice. I made a comfortable bed for him and salvaged a strip of metal from one of the chairs and splinted his injured leg.
Then Kelly and I ferried back and forth between the wrecked vehicle and the diner and moved our supplies across. I was glad now that I’d allowed Hooley to oversupply us. I didn’t know how long we were going to be stuck at Sal’s Diner, but we had enough food for a couple of weeks. The more pressing problem was water. Even if we rationed we’d maybe have four or five day’s worth. I buried the corpse of the child that Thelma had left behind and I set up a barricade in the road out front to stop any traffic. Kelly patched up the flesh wounds I’d sustained and we waited.
On day two, Kelly asked me about Rosie and I told her how I’d met Rosita Morales Collins and how I’d fallen in love with her on our first date. I told her about Rosie’s pregnancy and about how we’d planned to name our daughter Ruby and about the terrible events in New York. I told her how Ruby had been taken from me and how I’d spent three years trying to find her and how I was determined to find her still.
“Do you miss her? Rosie, I mean?” Kelly asked when I was done.
“Yes” I said. “Yes, I do.” And although that was true, the Chris Collins that still missed Rosie was a different man to who I was now. He was someone who seemed to me more like a casual acquaintance than a past version of myself.
“I’ve got something I want to tell you, Chris.” Kelly said suddenly. “Something I’ve been meaning to tell you for a long time now.”
She paused, and I raised my eyebrows prompting her to continue.
“I love you, Chris,” she suddenly blurted.
I didn’t mean to laugh, but this sudden admission caught me totally unawares and I couldn’t stop myself.
“Well, I’m glad you find it funny,” Kelly said crossly.
“No, wait, Kel,” I said still giggling, “I didn’t mean it like that, you caught me by surprise, that’s all.”
“Well, I do,” Kelly said adamantly, “So you can take it any way you like.”
“Listen kid,” I said, “It’s just a crush, you’ll get over it, once you’re in Flagstaff you’ll meet someone your own age and –”
“First off,” Kelly said, “Stop calling me kid, second, don’t tell me how I’m supposed to feel.”
“Okay, I apologize. I didn’t mean to patronize you, but seriously, I’m old enough to be your father.”
“Oh yes,” she said. “Because it’s normal to father a child at ten years of age.”
“I mean, have you ever even had a boyfriend?”
“Is that important?”
“Look Kelly,” I said, “I’m flattered, I really am. You’re beautiful, and you’ll make some man very happy some day.”
“Just not you,” she said, and there were tears in her eyes.