"A thrill-a-minute joy ride through the haunted house that is post-apocalyptic America." 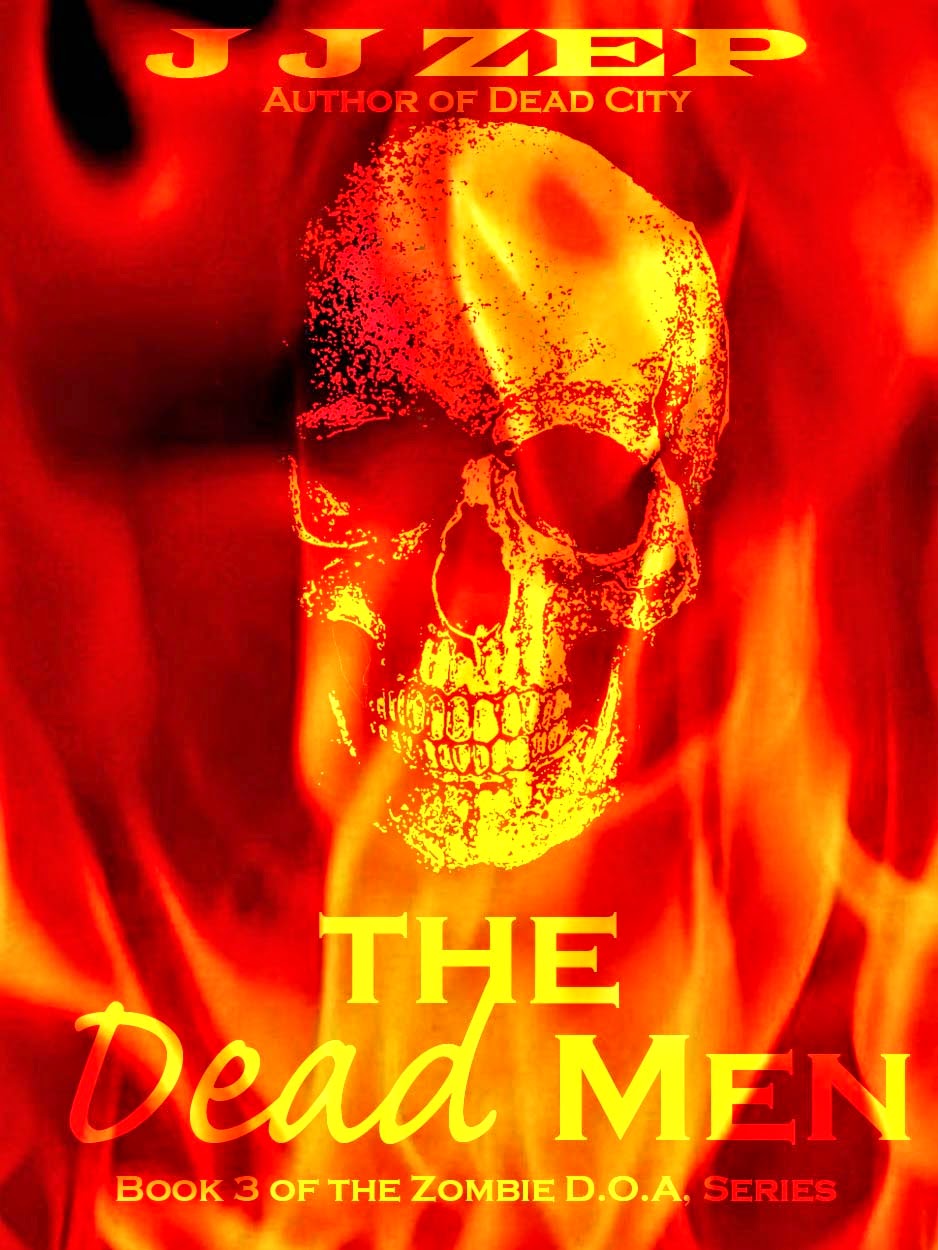 Chris Collins has just escaped from the Zombie Zoo in Tulsa with a busload or women and children. All he wants is to find safe haven for them and then resume his search for Ruby, the three-year-old daughter he last saw when she was a new born baby.

But if he thought it was going to be that easy, he was wrong, dead wrong.

The Dead Men, a cannibalistic motorcycle gang that be clashed with in Oklahoma are hot on his trail.

They've tracked him to Pagan, a ghost town in the Texas Panhandle. They're out for revenge.

And this time they're not even human.

We set off on foot towards some hills in the distance, Nate and I carrying the injured man between us. Cal slipped in and out of consciousness and was at times delirious, singing ‘The Star Spangled Banner’ at the top of his voice while Nate tried to shush him. We needed to be quiet. I doubted if our little demolition derby had taken out all the bikers and those that had survived were likely to regroup and come looking for revenge.
And there were also Z’s to be concerned about. They were less common outside the cities, but not unknown.
Nate led us away from the main path and down an embankment where a dry riverbed carved its way across the dusty plain. We followed the path of the river towards the hills, reaching them by daybreak. The river welled up a few small pools here and we were able to rest and take on some water.
I had a look at Cal’s wound and it looked swollen and angry. Fortunately, it looked as if one of the snake’s fangs had struck bone, so there was only one puncture wound, to the side of his calf. Still it didn’t look good and I could see that he needed medical treatment.
“Doc Cartwright will get that fixed up real soon,” Nate assured Cal, to which Cal responded with a pitch perfect rendition of  “O! say does that star-spangled banner yet wave, O'er the land of the free and the home of the brave!”
We got going again soon after, still following the path of the river as it cut through the hills and reaching the town of Pagan, Texas before noon.

The town squatted on a dusty prairie in the shadow of the low-lying caprock hills we’d just crossed. Calling it a town is perhaps an exaggeration, ghost town would be more apt. The jurisdiction consisted of four roads crossing each other like the grid for a game of tick-tack-toe.  There was a town hall, a sheriff’s office, a church and a grocery store, an abandoned saloon stood in the main street, called A Street by the locals. Other than that, there were rows of wood framed houses, most of them derelict.
All of the roads were dirt, and a dirt track connected the town to route 83. Not that it mattered, there wasn’t a single motor vehicle in the entire place.
Nate and I carried Cal to Doc Cartwright’s surgery, which was in the former town hall. Dr. Yonder Cartwright was an attractive woman of about thirty-five. She examined Cal’s wounds, injected him with an anti-serum and pronounced, “He’ll live.”
Afterwards, Nate took me on what he referred to as the, ‘five cent tour‘ of the town.
“I notice you don’t have any defenses,” I said. “No perimeter fence, no razor wire, no lookout posts.”
“Don’t get me started on that,” Nate said. “I been ragging on about it for months. Council’s mostly behind it, but Pastor Ray uses his veto to block me every time.“
“Pastor Ray?”
“Local clergyman. You’ll meet him soon enough. Probably insist on you attending service tonight.”
“How many people in Pagan?”
“The folks you just brought in adds about half to the town’s population, that makes it about sixty, your folks included, if they stick around. Most don’t.”
In the distance, I could see the dog chasing something through the brush, kicking up a miniature dust storm.
“How long you planning on staying?” Nate asked.
“Not long, a day or two at most.” In truth, I didn’t even want to stay even that long. I wanted to be back on the road west. I wanted to find Ruby.
The dog came trotting back now, carrying something in his jaws, a frayed old softball. I took it from him and threw it and he gave me a look as if to say, “You expect me to chase that?”
“Speak of the devil,” Nate said, and as I turned I saw a man walking quickly towards us. He was wearing a coat and tie, despite the heat of the day, and he had a thick book clutched under his arm.  As he approached he broke into a dazzling smile and extended his hand.
“Ray McCool,” he said, “humble servant of the Lord Jesus. Tell me son, are you saved?”
“Chris Collins,” I said, accepting his hand and ignoring his question.
“Are you a man of faith, Chris?”
“I believe I am, father.”
McCool laughed, “Oh no son, call me Pastor Ray, not father, we don’t truck much with papists in these parts. You’re not Catholic, are you?“ He made the word sound like a curse.
“As a matter of fact father, yes I am. When you’re Irish, it’s kind of a given.”
“Well then,” Pastor Ray said, most of the sunny disposition bleaching from his face, “I can only pray for your immortal soul. Good day, sir. Nate.” He turned and marched off, and Nate waited until he was almost out of earshot before collapsing with laughter.
“Man,” he said, slapping himself on the thigh, “I’ve never seen ol’ God Ray knocked off his stride so quickly. I think I might become Catholic myself, just to rattle his chain.”
We finished the tour with Nate showing me some of the houses, old wood frames dating back to god knows when, many of them collapsed. The best dwellings in town were out towards the church and the grandest of those Nate identified as belonging to Pastor Ray.
“Speaking of houses, you’re welcome to bunk with me while you’re in town. It ain’t much but –”
“I’d be glad to Nate,” I said.

That night we were invited to dinner at Doc Cartwright’s. Nate warned me in advance that the doc was a vegetarian, and “no cook,” but the meal was passable, especially after living on military rations for so long.
The dog tagged along too and after finishing off two cans of dog chow, Yonder gave him a thorough examination and pronounced him to be in perfect health, if a little bit underweight, and vermin infested.
“You seem to know a lot about dogs,” I said.
“I should,” she laughed, “I’m a vet. In these times, folks have to make do with what they got. Don’t they, Nate?”
“Best doctor I ever had,” Nate said. “Prettiest too.”
Yonder blushed at the compliment, then said, “I’m going to give this big guy a flea dip and get rid of some of these ticks he’s carrying. Why don’t you fellers sit out on the porch? There’s a couple of beers in the kitchen, not cold I’m afraid.”
Yonder took the dog into a backroom and Nate and I sat on the front porch, watching a lightning storm develop in the distance. From the church we could hear the sound of Pastor Ray’s flock at worship.
I’ve never been much of a drinker, so the few sips of lukewarm Miller I took made me feel light headed. Still I enjoyed Nate’s company. He had an easy way about him and a good knowledge of the area.
“Beauty of this place is that you won’t find it on any map,” Nate said. “It’s been pretty much abandoned since the forties. There used to be a silver mine up in the hills but that was played out even before the town was deserted.”
“How’d you find this place?”
“Cal and I used to come down from Amarillo to climb in those hills, before all of this happened, so we knew the town was here. After, we figured this place was far enough off the beaten track to be relatively safe, so we made our way down.”
“And the others?”
“We rescued some of them from one of the Dead Men’s slave caravans. Some of them just sort of drifted in. And then one day Pastor Ray walked into town leading his flock across the plains like Moses leading the Israelites out of bondage.”
“How does he feel about living in a town called Pagan?”
“He brings it up every council meeting. Wants to change it to Bethlehem. I veto him every time.”
“What about Yonder?”
“What about her?” Nate said defensively.
“You and her an item?”
“She’s a good woman,” Nate said and I could see he was blushing.
“Ta da,” Yonder said from behind us, “May I present…what’s your dog’s name, Chris?”
“He ain’t really my dog, but wow!”
Yonder had really given the dog the full treatment. His coat was practically glowing and he had a glint in his eye and what looked like a smile on his fox-like face.
“He has to have a name,” Yonder insisted.