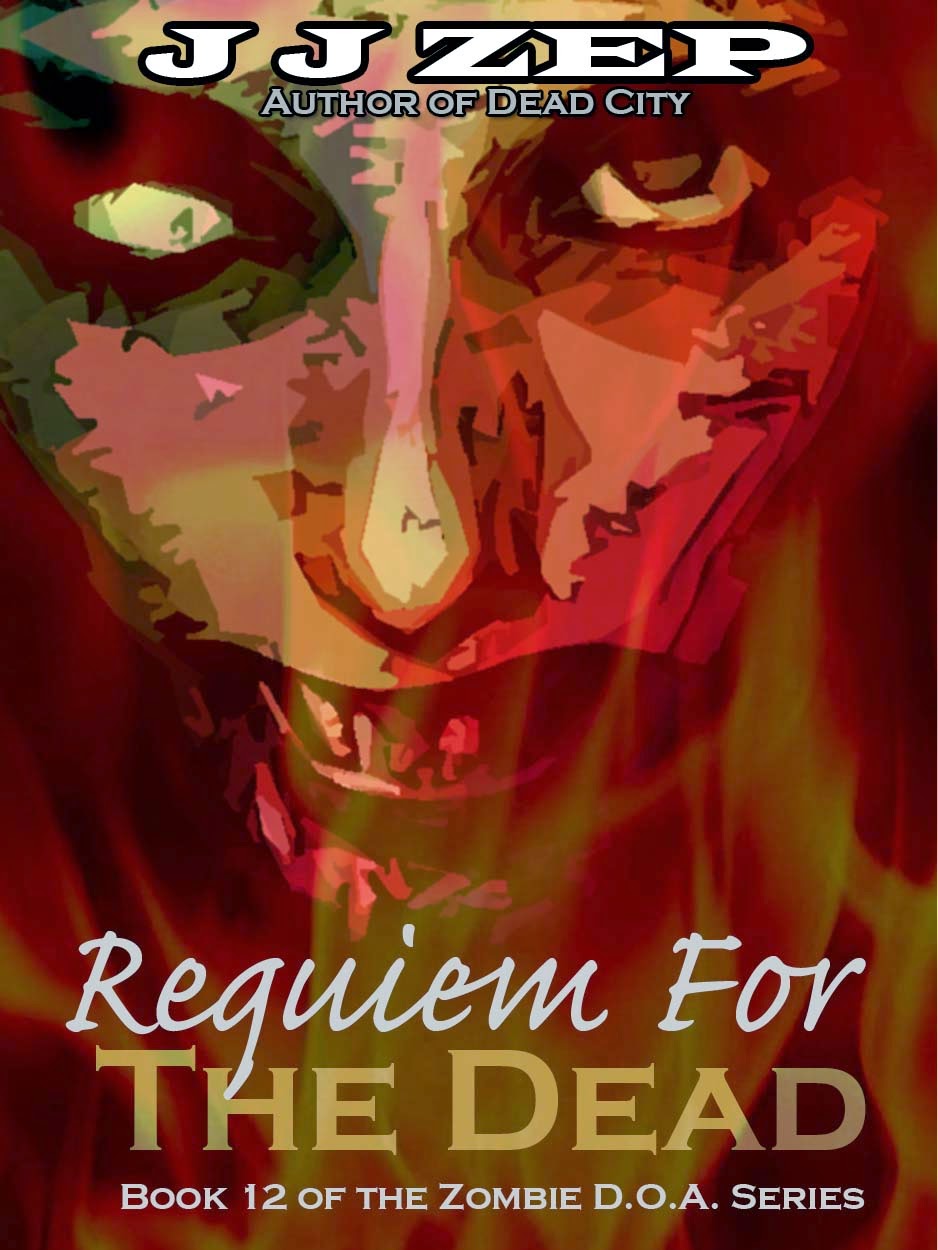 Chris Collins has finally reached Washington D.C. and must confront the man who kidnapped his family.

But getting to former senator Buzz Talbert won't be easy.

For starters, Talbert has declared himself President of the United States, installed himself in the White House, and surrounded himself with a huge army. He's thrown up high fences to keep himself and his slave labor force safe.

But will those fences be enough to keep out Colonel Gareth Stone? Stone, now a demented creature clinging to his last scrap of humanity, is headed for Washington too, bent on revenge and with a zombie army a million strong under his command.

Throw in a general who wants to nuke every major American city, a brutal, double-crossing rebel leader, a battle royale at the Lincoln Memorial, and an unusual 10-pin bowling game, and you have a recipe for a rip-roaring, action -packed, post-apocalyptic thrill ride.

Requiem For The Dead

Chris Collins stood beside the cracked marble memorial of the Tomb of the Unknowns in Arlington National Cemetery. He looked across the Potomac River towards Washington D.C., lifted the binoculars to his eyes and surveyed the amazing scene before him. In the midst of the darkened, zombie-infested city that had once been the nation’s capital, the White House stood like a tiered wedding cake, its manicured gardens and pristine facade under lights.
“Man’s either a genius or a madman,” Joe Thursday said beside him.
“Or both,” Chris replied.
“Got to hand it to him though,” Joe said. “He’s been here, what, a week? Won’t have found the building in that condition, took some doing, restoring it like that. Not to mention getting the power grid up and running.”
“Yeah,” Chris said, scanning the glasses, “Pity the same can’t be said for his sense of priorities.”
He scanned towards the area just south of the White House, a rectangle of parkland that appeared to have been turned into a shantytown. There was no electricity here, no neatly trimmed lawns. In their stead, there were shacks and tents and campfires, all of them surrounded by high fences under heavy guard.
“Tell me what you think of the fortifications,” Chris said, handing the binoculars over.
Joe lifted the glasses, scanned left and right, blew through his teeth. “Not good, compadre. He must have a regiment down there, half-tracks, Strykers. Those will be carrying fifty-mils at least, maybe even some one-o-fives. Not good at all.”
“And?”
“And what?”
“And how do we get in?”
Joe looked through the glasses again, speaking as he did, “Far as I can see, our best bet is, I pretend to be the President of the Democratic Republic of Togo and you pretend to be my wife. We walk up to the front gate and say we’re there for an official visit with the president.”
“I was being serious, Joe.”
“So was I,” Joe said. “That has about as much chance of succeeding as any kind of commando raid. We ain’t getting in there, compadre. Simple as.”
“I’m getting in,” Chris said.
“Course you are. But if you’re thinking about going in there blasting away, forget about it. This is going to take some working out.”
“Sorry to cause alarm, fellers,” Hooley Hoolihan said from his lookout position in the darkness, “But we got company.”
Chris looked down the hill towards the rows of white headstones, glowing translucent in the moonlight among the rolling fields of grass and weeds. There was movement down there, and he knew what it was even before he picked up their infernal Z hum and the tramp of feet climbing the hill.
“Ah, great, Zs,” he said.
“Zombies in a bone yard,” Joe said. “How cliché.”

The Zs poured towards them, a slow but relentless tide appearing from between the trees, working their way uphill, blundering over the gravestones. Chris estimated that there must be hundreds, the forerunners now just beginning to climb the steps leading up to the monument.
“Hold your fire,” Joe said. “We don’t want to alert our friends across the river. Let’s just slip out right and head back to the Humvee.”
He’d hardly spoken the words when a shot sounded. “Hooley! For Christ’s sake. What did I just –?”
“Sorry Joe,” Hooley said. “But we ain’t getting back to the Humvee this way. I got the sum bitches coming in on this end too.”
“This side as well,” Ruby said, backing towards them, her sword in her hand, Ferret cowering behind her.
Chris looked along the paths that ran left and right, away from the monument. Christ! Where had they all come from? Another shot sounded, Hooley again, picking off one of the creatures that had broken ranks to the right of them.
The Zs climbing the hill poured up the broad stone staircase, already half way up. That way was definitely cut off, but the path to the right, leading back to the Humvee was infested too, and the one left of them, emerging from between a grove of trees, wasn’t much better. The only escape was to the rear, a space occupied by an impressive-looking building with Doric columns, which a sign identified as the “Memorial Display Room”. Beyond the building Chris could make out a stone colonnade and a direction sign that said, “Amphitheater.”
“Joe, we’re going to have to fall back!” he yelled, as the first of the Zs reached the top of the stairs and took a bullet in its face.
“Fall back to where?” Joe shouted back.
“The amphitheater,” Chris said.
“Are you crazy, Collins? We get trapped in there and we’ll be like a couple of Froot Loops in a bowl, waiting to be scooped up.”
“You got any better ideas?”
Joe did a quick scan of the surroundings. “Guess not,” he said, then, “Ruby! Hooley! Fall back! And keep it tight!”
The Zs spilled across the threshold at the top of the stairs. Chris fired into them and then backed towards Joe and Ruby. He could hear the snap of Hooley’s rifle as he held the Zs on the right flank at bay. They maneuvered themselves into a tight grouping, Hooley watching the right, Chris covering the left, Joe keeping an eye on the massed Zs about twenty yards in front of them, Ruby watching the rear, Ferret encased between them. It was a formation Joe called, “The Alamo.”
“Easy does it now,” Joe said. “Back up nice and slow. Preserve your ammo gents. Only take out the ones that break ranks, Hooley that means you.”
They retreated up a stone stairway, worked their way around the display room and entered the colonnade, a circular structure of twin columns with a walkway running between them. The amphitheater was at the center of the colonnade, a deep bowl, descending into the darkness, the only illumination coming from the moonglow off its white marble steps. Chris understood what Joe had meant now, if they went down there, the Zs would have them trapped.
“Whatever you do,” Joe said, “Stick to the top tier. We go down into that bowl and we ain’t coming out. Okay, left or right? Chris? Hooley?”
“Right!” Hooley said immediately, already setting off down the path.
“Don’t!” Ruby shouted after him.
Chris looked across the dark expanse of the bowl and could see what Ruby had seen. The Zs were pouring through the gaps between the columns, stumbling onto the path. They were surrounded.

“Down!” Joe shouted, as Hooley came running back towards them.
“We’ll be trapped down there!”
“Down!” Joe said again. “We stay up here and we’re getting eaten.”
The Zs were on the walkway, left and right, fore and aft, a black mass that made it impossible to discern one individual from another. The electrical hum of them bounced and reverberated off the marble walls of the structure, amplified into a cacophony that felt as though it might make your ears bleed if you listened to it too long.
Joe and Hooley were already descending the steps, Ruby and Ferret between them. Chris took one last look towards the advancing Zs and then followed, dropping quickly from the walkway and praying he hadn’t been spotted. The first fifteen or so tiers were bathed in moonlight and he covered the ground fast, taking the steps three at a time. Then the darkness spilled in to hide him and he counted out thirty more tiers before he hit bottom.
For a moment he felt disorientated, but as his eyes adjusted he could make out a square structure, positioned back and center on the floor of the amphitheater. He scurried towards it, crept around and found the others hiding there. The structure was a stone plinth, its center hollow, enough space in there for Ferret and Ruby, and enough cover behind it for Chris, Joe and Hooley.
Had the Zs followed them down? He wasn’t sure. But the Zs were definitely still out there, their electrical buzz filling the air like a swarm of angry wasps. He fought the desire to cover his ears, peered around the edge of the plinth and directed his gaze upward. There were hundreds of the things up there, silhouetted by a full moon, looking down into the bowl like gods considering the ultimate fate of humanity, none of them moving.
Perhaps they were confused, uncertain of where their quarry had disappeared to, maybe they’d leave soon. Wishful thinking, he told himself. Zs tracked by scent and the smell of flesh would still be strong in their nostrils. Sooner or later one of them was going to figure it out and they’d come pouring down into the bowl.
He felt a nudge against his arm. “Any movement out there?” Joe whispered.
Chris shook his head, no.
“Good,” Joe said. “Sit tight.”
Chris looked around the plinth again, traced his eye from the darkness of the lower levels to the middle tiers, their white, marble steps luminous in the moonlight. He picked out movement higher up. The Zs were getting restless, a ripple running through their ranks like a wave trickling towards the shore of a sunless sea. Now, one of them made his move, dropping from the walkway to the first tier. Another followed and then another, seemingly caught up in a chain reaction as they spilled over and flowed downward.
“They’re coming,” Chris said over his shoulder.
“We’re done for then,” Joe said back.