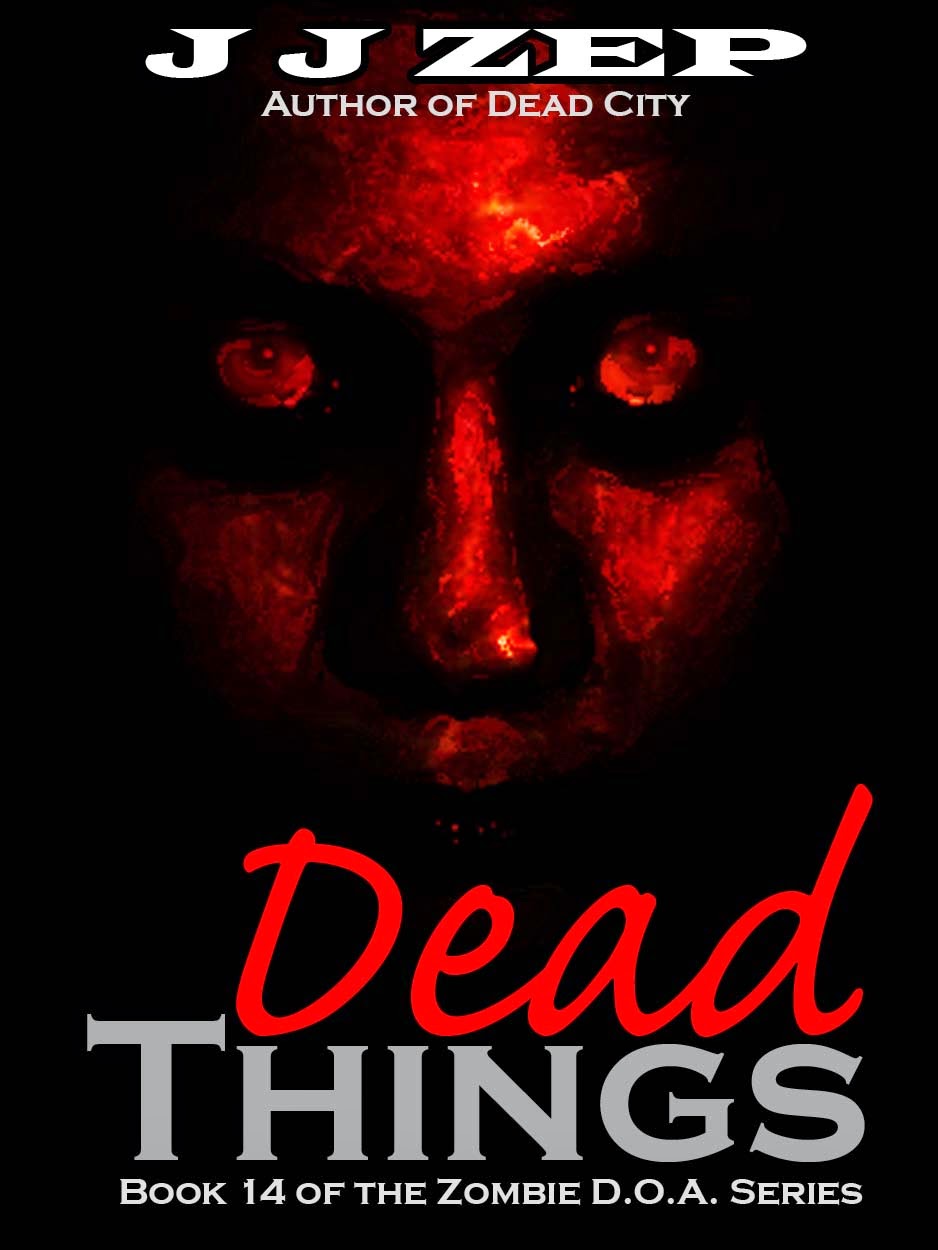 On the day that the Rosenthal Plan was initiated, Chris Collins had a fight with his wife, Kelly. The plan called for the extermination of all zombies on Staten Island, to prepare the borough for resettlement by humans. Chris had committed his services to the newly re-elected Mayor Rosenthal. Kelly, now seven months pregnant with their fourth child, felt his responsibilities lay closer to home.
“I gave my word, Kel,” Chris said. He was standing in the doorway to the bathroom. His wife, up uncharacteristically early, stood next to their marital bed, her arms folded across her chest and supported by her huge belly. “Besides, I happen to believe in this project. It will do a lot of good for a lot of people.”
“I’m sure it will,” Kelly said. “I think it’s a good idea too, and I’m happy for the people it will help. But why does it always have to be you, Chris?”
“It’s not only me. Lots of other people have volunteered.”
“Really?” Kelly said, a look of mock disbelief on her face. Despite the argument Chris thought it made her look incredibly cute. “How many other volunteers from Manhattan?”
“Well, there’s Dave and –”
“Dave Bamber is military, he works for the city, he has to go.”
“And there’s…”
“Go on,” Kelly coaxed, a victory smirk beginning to blossom on her face. “How many others?”
“That’s not the point, Kel.”
“That’s exactly the point, not even Joe’s going.”
“Joe’s still hobbling around on a damaged ankle.”
“Hooley then, Hooley’s not going.”
Henpecked by your mother, Chris wanted to say and decided not to. “I’m not Hooley,” he said instead.
“No,” Kelly pouted. “He pays attention to his wife’s concerns.”
The door to the bedroom angled open. Samantha poked her head through, “Mom? Dad? Everything okay?”
“Everything’s fine, honey. What are you doing up so early?” Like her mother, Sam was usually a sound sleeper and a reluctant riser.
“I thought I heard shouting.”
“Your mother and I were just discussing something.”
“Fighting,” Sam said, in a voice that carried the hint of a reprimand.
“Just talking.”
“Go on back to bed, Sam,” Kelly said, giving her daughter a reassuring smile “Everything’s fine.”
“Please don’t fight,” Sam said, tears spilling over. Spousal arguments were a rarity in the Collins household.
“Ah honey,” Chris said. He started towards her.
“I’m fine,” Samantha said, withdrawing from the doorway. “Just please don’t fight.” The door clicked shut just before Chris got to it. He heard Kelly chuckling behind him.
“Now, that’s the way to win an argument,” she said.
“I thought we were having a discussion.”
Kelly waddled over to where he was standing, slipped her arms around his waist and held him. Chris hugged her back and placed a kiss on the top of her head.
“I’m not going to talk you out of this, am I?”
“I have to go, Kel.”
He braced himself for Kelly’s counterargument, but Samantha’s intrusion seemed to have achieved its objective. Kelly let out a long sigh.  “You be careful out there,” she said into his chest.
“Careful’s my middle name.”
“I thought your middle name was Cruisin’.”
“That’s my first name.”

An hour later he was standing on the sidewalk, a tote bag at his feet, his AK-47 slung over his shoulder. Ruby was with him, her sword across the back of her black combat suit, a frown knitting her brows. Chris though his daughter must be the most serious fifteen-year-old in the world. Sixteen, he corrected himself, Ruby had had a birthday a couple of months ago.
It was early-January, New York cold, the sky an eye-watering shade of blue, the air mercifully still. The slushy remains of last evening’s minor snowfall littered the sidewalk and crept down the gutters like alien slime. Chris shuffled his feet and blew into his cupped hands. He looked north along the frigid expanse of Columbus Avenue towards the 125th Street barrier. He thought it might snow again later.
“They’re coming,” Ruby said and in the next moment Chris picked up the low and distinct thrum of diesel engines. Five minutes later, the first of the military vehicles made the turn from 125th onto Columbus, their engines now the sound of rolling thunder, bouncing back off the valley walls created by the buildings.
Three Humvees lead the convoy, behind them six transports in drab, military green. Two of those - the one’s trailing power generators - were supply trucks, the other four were empty. Later they’d pick up the volunteers from Queens and Brooklyn.
The convoy rolled to a stop in the middle of the street. Chris picked up his bag and walked towards the lead vehicle, where the door had just flipped open. He stood aside and let Ruby scramble on board ahead of him. Then he got in himself, pulling the door shut behind him.
“Cold enough for you?” Dave Bamber said.
“Hell yeah,” Chris said, shaking the hand that Bamber extended. Bamber wore the insignia of a full bird colonel these days. “Couldn’t you have picked a better season for this Z hunt?”
“Best time for it,” Bamber said. “Cold makes the Zs lethargic, and if we get some more snow, which I fancy we will later on, those Zs are going to stand out like targets on a rifle range.”
The Humvee made a left turn, then a right and headed along Broadway towards downtown.
“Figured we’d cross via the Brooklyn Bridge,” Bamber said, “Pick up your people there. I got another group heading out over the Triboro to load up the Queens volunteers. We’ll RV at the Belt and cross via the Verrazano-Narrows into Staten, pitch camp at the golf course in Silver Lakes.”
Chris nodded. He knew all of this of course, had been involved in the planning process. He figured Bamber was just making conversation.
“Bet Joe’s sore to be missing out of the action,” Bamber chuckled in similar vein.
“Wouldn’t be so sure about that,” Chris said. “I think he actually enjoys swanning around the apartment in his PJs and dressing gown. Thinks he’s Hugh Hefner.”
Bamber laughed at that and the conversation died down soon after. They crossed the Brooklyn Bridge, leaving Manhattan behind for only the second time since he’d brought Ruby back from Scolfield’s little torture palace in Hackensack. He wondered what had happened to Scolfield, decided it didn’t matter right now. They had business to take care of, serious business. For the first time since the Rosenthal Plan had first been floated, he considered the possibility that it might not be such a great idea after all.

Bamber’s prediction of snow, and his own hunch about it, turned out to be right. By the time they trundled from the bridge onto the Staten Island Expressway, it had clouded over, and the snow was falling in thick flurries. The Expressway was clear of vehicles for the section of road they’d have to travel (a couple of earth movers sent in the week before had taken care of that) and they stayed with it until Clove Road where they took the off ramp. This road, leading all the way to Port Richmond, would form the barrier of their initial thrust. The aim was to secure the north east corner of the island, and to work out from there. Their starting point, though, was the Silver Lake reservoir and the land surrounding it. That area was roughly wedge-shaped, and bounded by Victory Boulevard to the east, Clove Road to the west, and Forest Avenue to the north. They were just making the turn into Victory Boulevard, now.
They hadn’t seen a Z since leaving Brooklyn and they saw their first one now, a bedraggled looking creature that stumbled into the road and threw out its arms as though it intended to engulf the Humvee. The driver simply put his foot down and drove the thing under his wheels.
Shortly thereafter they made a right turn and passed through a collapsed gate towards the golf club.
“I figured we’d set up camp here,” Bamber said. “No one wants to be pitching tents in this shit and the clubhouse is in a good position, slightly elevated, open fields of fire to all sides, more than enough room to accommodate our numbers.”
“Sounds solid,” Chris said.
“Might get a bit cold, but I hauled some big ol’ oil heaters along. Can’t have our civilian volunteers freezing their little tushies off.” He laughed his familiar chuckle. The Humvee rolled into a large parking lot, sitting adjacent to the clubhouse.
“Let’s call a halt here, corporal,” Bamber instructed the driver. They were way back from the building, the rest of the convoy behind them, stopped on the approach road. The snow was falling more heavily now, turning the world white and cutting down their visibility.
Bamber lifted a handset to his mouth and spoke into it. “Charlie and Delta teams, move into position.”
“Roger that,” came the dual reply.
Chris heard the sound of engines being raced and the two Humvees peeled off from behind them, passed them by, and entered the lot. There they did a wide turn and came to a halt maybe a hundred feet from the clubhouse, facing the building. The firing hatches popped and a gunner appeared in each. They were dressed in white snowsuits, almost invisible against the snowy background.
“Right,” Bamber said. “Let’s see if this little radio broadcast of yours strikes a chord with the residents.” He got on the radio again. “Delta, this is team leader, send that sermon, over.”
“Roger that team leader, sending now, stand by.”
The stillness of the afternoon was suddenly broken by a barely perceptible hum. Even under the layers of clothing he was wearing, Chris felt the hairs on his arms rise. He felt an itch in his back teeth, a buzz in his head that reverberated through his skull like a bone drill.
He looked through the windshield towards the low brick structure standing at the other end of the lot. The snow continued to fall. Nothing else was moving out there.
Bamber lifted the handset again, spoke impatiently into it. “Delta, this is team leader, are you transmitting, over?”
The question was redundant. It was obvious the transmission was being sent.
“That’s affirmative, team leader. Message is looping, loud and –”
A clatter of gunfire interrupted the conversation, not 20 or 50-mil, Chris thought, 7.62, probably Browning. At the entrance to the clubhouse a Z was being torn apart by the gunfire, jiving like a marionette with someone jangling the strings.
“Delta, Charlie, hold fire,” Bamber barked. “Get them out into the lot. You’re shooting up our goddamn HQ!”
The guns fell silent and remained that way while the Zs stumbled from the building, drawn towards certain death by the dissonant Z buzz being broadcast from the Humvee. They crept forward, treacle-slow, a tide of pitiful, blackened waifs, backlit by the whiteness of the snow.
Bamber let them come, then spoke into the microphone one last time. “Charlie, Delta, you have a go. Let’s clean house.”
The guns opened up immediately, spewing metallic death across the lot. Some of the Zs rippled and danced, disgorging their black blood into the pristine snow. Others simply collapsed, almost gratefully, to the ground.